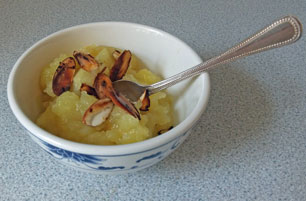 Apple compote – stewed apples—don’t have to be boring! Apples are really good for you. The saying, “An apple-a-day will keep the doctor away has a lot of truth in it. In this recipe I’ve mixed cooking apples with dessert apples. This does two things: it sweetens the often tart cooking apples meaning that no sugar is required. And the dessert apples retain their form, so you get a mixture of textures too.

2-4 portions – depending on the size of the apples

Peel and cut the apples into small pieces. Add your choice of spice. Add a little water to the pan – approximately 1 cm in the bottom of the pan. Bring to the boil. Turn the heat down and cook (usually less than 10 minutes) until the Bramley apples have become a pulp – the dessert apple will still be in chunks.

For the almonds, carefully cut each almond horizontally with a sharp knife. It’s fiddly – so please be careful with the knife – but on some days it’s really worth the effort! Place the white sides down in to a small frying pan. Put on the heat. After a minute or two toss the almonds lightly so they flip-over. It only takes a couple of minutes for the almonds to be toasted.

To serve, place the stewed apple into a small bowl. If using, place a dollop of natural yoghurt on top. Sprinkle with toasted almonds – or other nuts. The apples can be served hot or cold.

For a fuller, spicier flavour, refrigerate the cooked apples the day before you need them.

Trackback from your site.

Receive my healthy recipes, nutritional advice, and tips on life coaching. I'm looking forward to getting to know you.