Butter or margarine? Which is best? 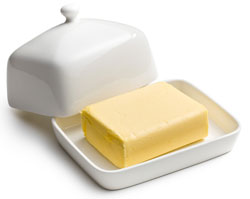 Due to persuasive advertising, most people believe that margarine, or the ‘Healthy Spreads’ as they are now often called, is a better choice than butter. But is it? Which is best for you – butter or margarine? I believe butter is better. Please don’t misunderstand: I’m not saying lashings of butter is good for you: it isn’t! Often there is a much better choice of an oil or fat, particularly in cooking. However, if you are going to choose one over the other, my recommendation would be butter. I know this is controversial, so let me explain a little more.

Butter and the saturated fats argument

In the early 60’s it was thought eating too much saturated fats, increased your cholesterol levels, and that this was contributing to the epidemic of heart disease. It’s now known it’s not as a simple as that. But back then butter, which is high in saturated fat, became the enemy. And so began a move away from butter to margarine: the latter’s status changed from a poor-mans-butter into a ‘healthy’ spread with new manufacturing techniques using polyunsaturated oils.
In 1964 Flora was launched onto the market as a ‘healthy’ margarine. An intensive advertising campaign educated people in the benefits of polyunsaturated fat. Flora positioned itself as the champion to reduce heart disease and became the sponsor of the London Marathon. It is largely down to their marketing that most people still believe margarine is better for health than butter. But this marketing doesn’t tell you how margarine is made…

The manufacture of margarine

Flora’s main advertising message was that polyunsaturated fats are so much better for you than saturated fats. And I agree—when that is, these oils are in their natural state. By the time these oils appear on our table, they are anything but natural. Let me start at the beginning. Polyunsaturated fats are found in seed, plant and nut oil. Oil: not solid fat. To make margarine the oils have to be transformed into a spreadable solid.
The extracted plant or nut oil are first neutralised to remove any free fatty acids which would give the margarine an unpleasant taste. The oil is then bleached and filtered to remove unwanted colour or impurities. To solidify the oil, one of several different methods are used: hydrogenation, fractionation or rearrangement. Hydrogenation was the most popular way. This involved heating the oil to a very high temperature then pumping hydrogen through it, which solidified the oil. To become the product we know as margarine, this solidified oil has to be coloured and flavoured. To get the texture ‘right’, whey, brine and emulsifiers are added. Finally, vitamins A and D are added to match the levels found in butter.
The old hydrogenation process produces what are known as trans fats. In the 1990’s science began to show that people who consumed significant amounts of trans fats were twice as likely to have a heart attack. Flora’s promotion of their margarine as a heart-disease minimising product was now shown to be potentially increasing the risks! Quietly, Flora switched away from hydrogenation. It took them over 2 years to change over to a different production method, but many of their rivals took years longer. As late as 2010 there were still some margarines being manufactured in this way.
The new way of solidifying oils is mostly done by either fractionation or rearrangement. The former involves chilling one oil (usually Palm Oil) to the point where its saturated fats crystallise and become solid. These solids are then blended into another oil until it reaches the right degree of plasticity (the texture for spreading). Rearrangement blends together two oils which have different melting characteristics. Blending the two together at the right temperatures changes the combined composition to form a solid.

There is an urban belief that if you eat foods with a lower calorie content than a similar product, which has a higher calorie content, then the former must be better for you.
Low Fat margarines were created to meet the desire of eating less calories. To create a lower-fat content margarine, manufacturers replace some of the oil with buttermilk, or they increase the whey and water content. The calorie content of full-fat margarine is the same as butter. Low fat margarines ‘feel’ light in the mouth: more watery—because they indeed have more water. It is fat that gives you a feeling of fullness. Low fat or “Light” versions often lead to a tendency to use more to get some taste, which really defeats the object of choosing them.

What’s really in our processed foods?

We are largely ignorant of how processed foods are actually made. When we pick up margarine or any other food and scan the ingredients list, we don’t know what changes the manufacturing process has done to the natural ingredient and its nutritional content. The oils used in margarine manufacture, in their raw state, are rich in vitamins and nutrients, for example, Olive Oil has good amounts of Omega 3 whilst Palm Oil (often hidden under the pseudonym of “vegetable oil”) has excellent antioxidants. All of these nutrients however are destroyed by the bleaching and high temperatures that they go through in the manufacture. Vitamins are added because the production process destroys those found naturally in the oils.
Labelling laws means that the ingredients of processed foods have to be listed, BUT chemicals used in the production process, but that do not end up in the final product, are not required to be listed. For example the bleaching chemicals and nickel used in the solidification process of margarine are not listed on the label.

In moderation—butter is probably better than margarine

Your body evolved over millennia to digest a whole range of different foods and it does so very efficiently when given natural food. Your body has not evolved to digest the chemically changed foods that were unknown to our Great Grandparents let alone our ancient ancestors.
Butter is no longer churned by hand: like margarine manufacture, most butter is produced in farm factories which look nothing like domestic kitchens, and yet the process is still the same as it has been for centuries: cream is churned; buttermilk is drained away; salt is added. It is not artificially changed.
Butter has a higher percentage of saturated fats than margarine. A diet high in saturated fats can be damaging to your health, and yet the modification of oils in the production of margarine can, in my view, be far more damaging to your health as your body hasn’t yet evolved to digest these changed compounds. My view is that in very modest amounts, butter is better than the same amount of margarine.
Finally, it is interesting to note that our French cousins eat far more butter and cream than we do in the UK and yet they have a far lower rates of heart disease. Cooking and preparing natural food is still high on their agenda. The difference in levels of heart disease could well be down to their use of more natural ingredients—even ones which we know are not particularly good for your health.
Eat Well—Be Well 🙂
I am always interested to hear your thoughts, views and ideas. Get in touch via the comments box below.

Zero calories – please don’t be fooled! Are You Eating Mindlessly? 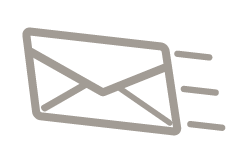